Spacelift can optionally be set to send webhooks - POST requests about run state changes - to an HTTP endpoint of your choice.

Webhooks can be set up by Spacelift administrators on per-stack basis. In order to do that, navigate to the Integrations section of the stack settings view. From the list of available integrations, select the Add webhook option: 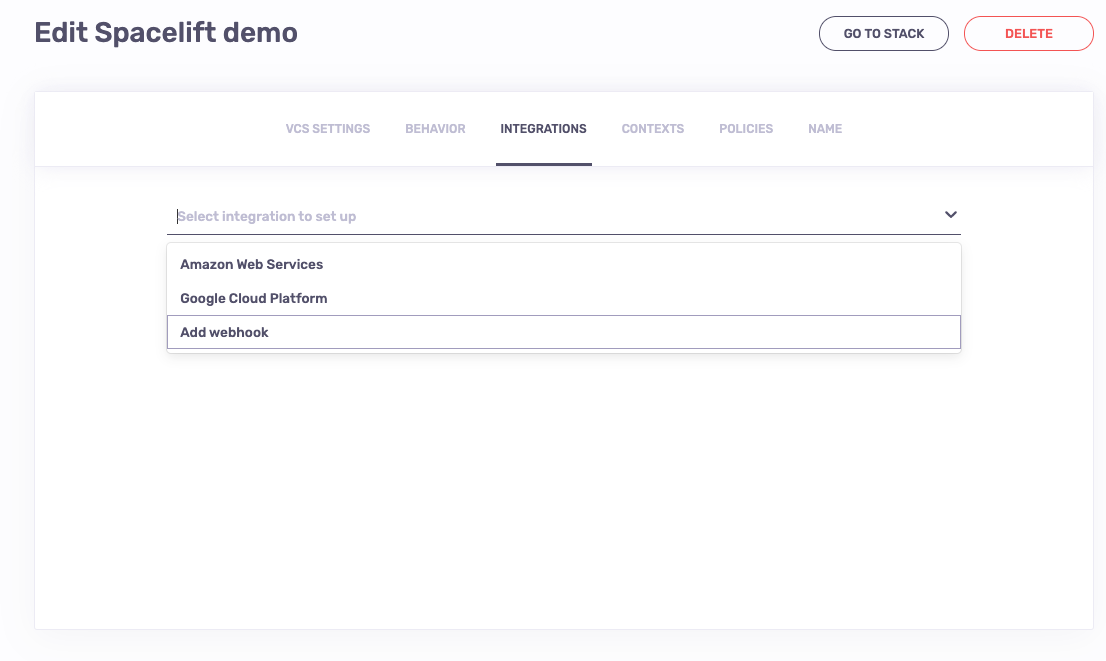 You can set up as many webhooks for a Stack as you need, though each one must have a unique endpoint.

You will be presented with a simple setup form that requires you to provide and endpoint to which the payload is sent, and an optional secret that you can use to validate that the incoming requests are indeed coming from Spacelift:

Please note that it's up to you to come up with a reasonably non-obvious secret.

Once saved, the webhook will appear on the list of integrations:

Unlike some other secrets in Spacelift, the webhook secret can be viewed by anyone with read access to the stack. If you suspect foul play, consider regenerating your secret.

By default webhooks are enabled which means that they are triggered every time there's a run state change event on the Stack they're attached to. If you want to temporarily disable some of the endpoints, you can do that without having to delete the whole integration.

To do that, just click on the Edit button on the desired webhook integration section:

...and click on the Enabled toggle to see it going gray:

Reversing this action is equally simple - just follow the same steps making sure that the toggle goes green:

Here's an example webhook payload for a notification about a manually triggered run having finished:

The payload consists of a few fields:

In order to validate the incoming payload, you will need to have the secret handy - the one you've generated yourself when creating or updating the webhook.