The approval policy allows organizations to create sophisticated run review and approval flows that reflect their preferred workflow, security goals, and business objectives. Without an explicit approval policy, anyone with write access to a stack can create a run (or a task). An approval policy can make this way more granular and contextual.

Runs can be reviewed when they enter one of the two states - queued or unconfirmed. When a queued run needs approval, it will not be scheduled before that approval is received, and if it is of a blocking type, it will block newer runs from scheduling, too. A queued run that's pending approval can be canceled at any point.

Here's an example of a queued run waiting for a human review - note how the last approval policy evaluation returned an Undecided decision. There's also a review button next to the cancelation one: 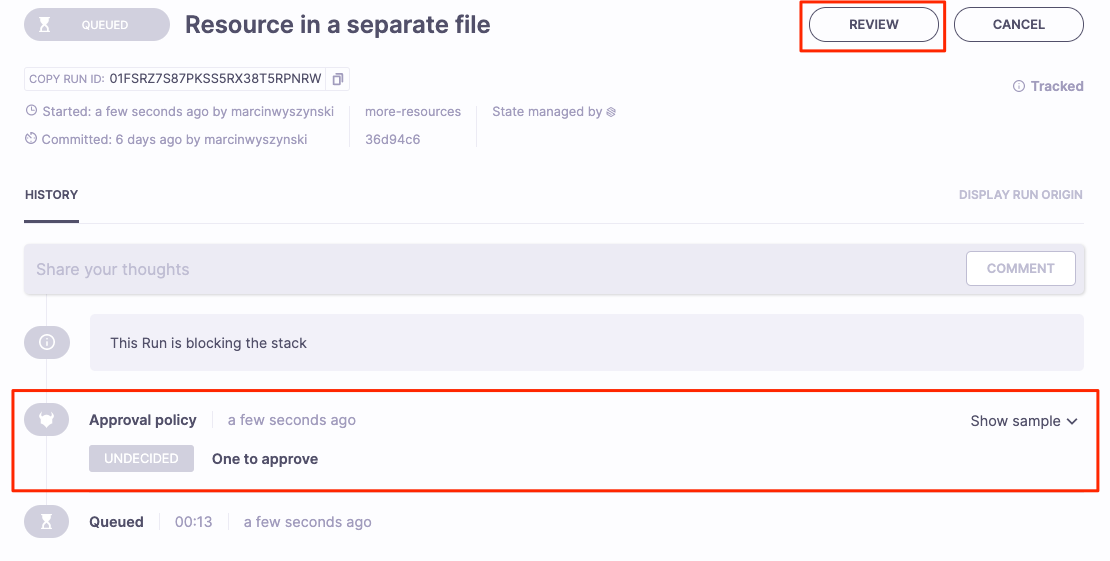 Review can be positive (approve) or negative (reject):

With a positive review, the approval policy could evaluate to Approve thus unblocking the run: 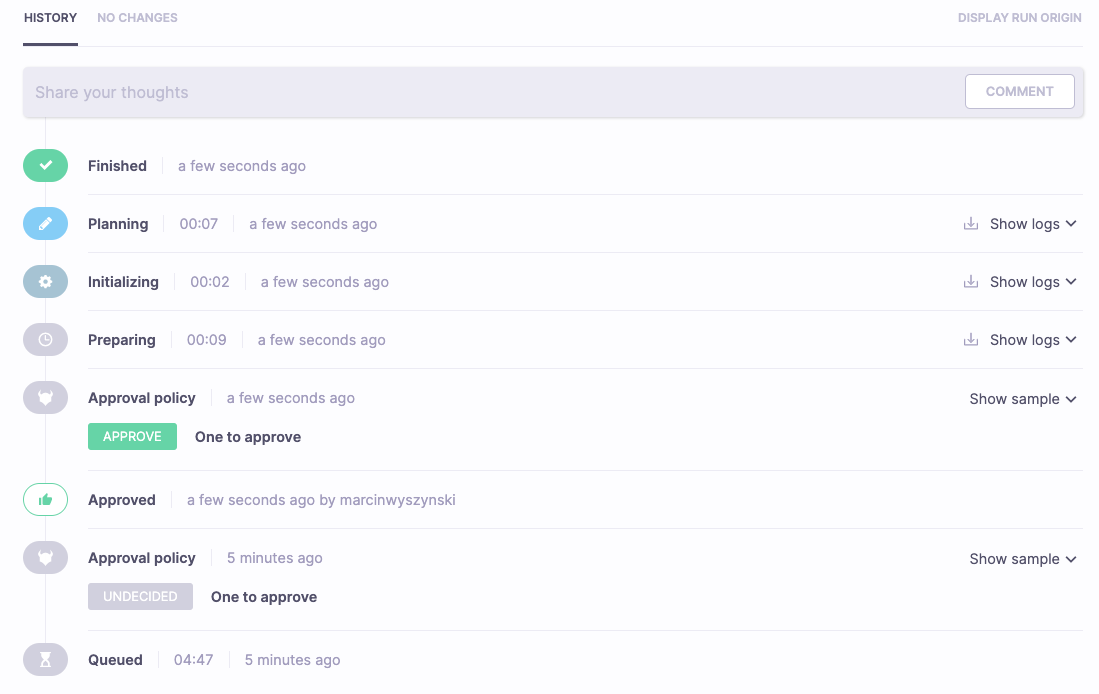 When an unconfirmed run needs approval, you will not be able to confirm it until that approval is received. The run can however be discarded at any point:

In principle, the run review and approval process are very similar to GitHub's Pull Request review, the only exception being that it's the Rego policy (rather than a set of checkboxes and dropdowns) that defines the exact conditions to approve the run.

Your approval policy can define the following boolean rules:

While the 'approve' rule must be defined in order for the run to be able to progress, it's perfectly valid to not define the 'reject' rule. In that case, runs that look invalid can be cleaned up (canceled or discarded) manually.

It's also perfectly acceptable for any given policy evaluation to return 'false' on both 'approve' and 'reject' rules. This only means that the result is yet 'undecided' and more reviews will be necessary to reach the conclusion. A perfect example would be a policy that requires 2 approvals for a given job - the first review is not yet supposed to set the 'approve' value to 'true'.

Users must have write or admin access to the stack to be able to approve changes.

When a user reviews the run, Spacelift persists their review and passes it to the approval policy, along with other reviews, plus some information about the run and its stack. The same user can review the same run as many times as they want, but only their newest review will be presented to the approval policy. This mechanism allows you to change your mind, very similar to Pull Request reviews.

This is the schema of the data input that each policy request will receive:

Two approvals and no rejections to approve an Unconfirmed run»

In this example, each Unconfirmed run will require two approvals - including proposed runs triggered by Git events. Additionally, the run should have no rejections. Anyone who rejects the run will need to change their mind in order for the run to go through.

We suggest requiring more than one review because one approval should come from the run/commit author to indicate that they're aware of what they're doing, especially if their VCS handle is different than their IdP handle. This is something we practice internally at Spacelift.

Two to approve, two to reject»

This is a variation of the above policy, but one that will automatically fail any run that receives more than one rejection.

Require approval for a task command not on the allowlist»

Sometimes you want to give certain roles but not others the power to approve certain workloads. The policy below approves an unconfirmed run or a task when either a Director approves it, or both DevOps and Security roles approve it:

You might want to ensure that your runs always get scheduled on a private worker pool, and do not fall back to the public worker pool.

You could use an Approval policy similar to this one to achieve this:

You probably want to auto-attach this policy to some, if not all, of your stacks.