By default, Spacelift uses a managed worker pool hosted and operated by us. This is very convenient, but often you may have special requirements regarding infrastructure, security or compliance, which aren't served by the public worker pool. This is why Spacelift also supports private worker pools, which you can use to host the workers which execute Spacelift workflows on your end.

In order to enjoy the maximum level of flexibility and security with a private worker pool, temporary run state is encrypted end-to-end, so only the workers in your worker pool can look inside it. We use asymmetric encryption to achieve this and only you ever have access to the private key.

To make sure that we have no access to your private key, you will need to generate it on your end, and use it to create a certificate signing request to give to Spacelift. We'll generate a certificate for you, so that workers can use it to authenticate with the Spacelift backend. The following command will generate the key and CSR:

Don't forget to store the spacelift.key file (private key) in a secure location. You’ll need it later, when launching workers in your worker pool.

You can set up your worker pool from the Spacelift UI by navigating to Worker Pools section of your account, or you can also create it programmatically using the spacelift_worker_pool resource type within the Spacelift Terraform provider. 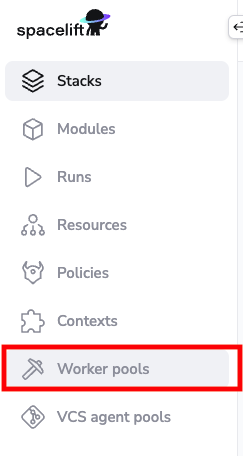 After clicking create, you will receive a token for the worker pool. Don't forget to save your Spacelift token in a secure location as you'll need this later when launching the worker pool. 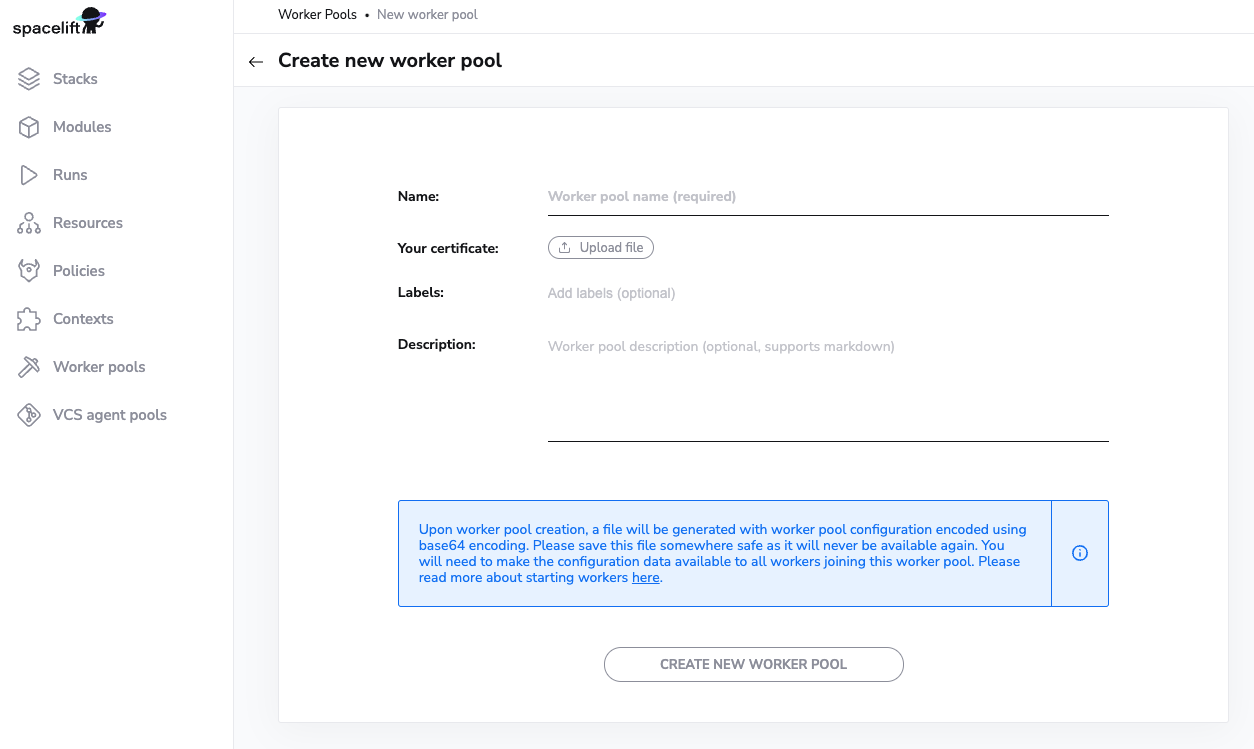 The launcher binary is available here. In order to work, it expects to be able to write to the local Docker socket. Unless you're using a Docker-based container scheduler like Kubernetes or ECS, please make sure that Docker is installed.

Finally, you can run the launcher binary by setting two environment variables:

Congrats! Your launcher should now connect to the Spacelift backend and start handling runs.

For AWS, Azure and GCP users we've prepared an easy way to run Spacelift worker pools. This repository contains the code for Spacelift's base images, and the following repositories contain Terraform modules to customize and deploy worker pools to AWS, Azure or GCP:

In addition, the spacelift-workerpool-k8s repository contains a Helm chart for deploying workers to Kubernetes.

AWS ECS is supported when using the EC2 launch type but Spacelift does not currently provide a Terraform module for this setup.

A number of configuration variables is available to customize how your launcher behaves:

When the launcher from a private worker pool is registering with the mothership, you can send along some tags that will allow you to uniquely identify the process/machine for the purpose of draining or debugging. Any environment variables using SPACELIFT_METADATA_ prefix will be passed on. As an example, if you're running Spacelift workers in EC2, you can do the following just before you execute the launcher binary:

Doing so will set your EC2 instance ID as instance_id tag in your worker.

VCS Agents are intended for users who have privately accessible version control systems (VCS), if your VCS is not private, then you do not need to use a VCS Agent.

Private workers need to be able to make outbound connections in order to communicate with Spacelift, as well as to access any resources required by your runs. If you have policies in place that require you to limit the outbound traffic allowed from your workers, you can use the following lists as a guide.

Your worker needs access to the following AWS services in order to function correctly. You can refer to the AWS documentation for their IP address ranges.

In addition, you will also need to allow access to the following:

Worker pools must be explicitly attached to stacks and/or modules in order to start processing their workloads. This can be done in the Behavior section of stack and module settings: