Every job that can touch your Spacelift-managed infrastructure is called a Run. There are four main types of runs, and each of them warrants a separate section.

Three of them are children of Stacks:

There's also a fourth type of run - module test case. Very similar to a tracked run, it's executed on a Terraform module.

In Spacelift, each run is executed on a worker node, inside a Docker container. We maintain a number of these worker nodes (collectively known as the public worker pool) that are available to all customers, but also allow individual customers to run our agent on their end, for their exclusive use. You can read more about worker pools here.

Regardless of whether you end up using a private or a public worker pool, each Spacelift run involves a handover between spacelift.io (which we like to call the mothership) and the worker node. After the handover, the worker node is fully responsible for running the job and communicating the results of the job back to the mothership.

It's important to know that it's always the worker node executing the run and accessing your infrastructure, never the mothership.

Regardless of the type of the job performed, some phases and terminal states are common. We discuss them here, so that we can refer to them when describing various types of runs in more detail.

Queued means that no worker has picked up the run yet. There are two possible reasons for that: there are no available workers, or the run is not eligible for processing.

Let's start with the latter - more common - scenario. Spacelift serializes all state-changing operations to the Stack. Both tracked runs and tasks have the capacity to change the state, they're never allowed to run in parallel. Instead, each of them gets an exclusive lock on the stack, blocking others from starting.

If you run or task is currently blocked by something else holding the lock on the stack, you'll see the link to the blocker in the header:

The other scenario is just running out of available workers. If you're using the public worker pool, you can track its availability on our status page. In particular, you should look at a system metric called Public worker queuing time. It indicates how long has the oldest run spent in the queue since becoming eligible for processing:

If you're using private workers, please refer to the worker pools documentation for troubleshooting advice.

Queued is a passive state meaning no operations are performed while a run is in this state. When a run is eligible for processing and a worker is available to pick it up, the state will automatically transition to Preparing. The user can cancel the run while it's still queued, transitioning it to the terminal Canceled state.

Canceled state means that the user has manually stopped a Queued run or task even before it had the chance to be picked up by the worker.

Canceled is a passive state meaning no operations are performed while a run is in this state. It's also a terminal state meaning that no further state can follow it.

Here's an example of one such handover: 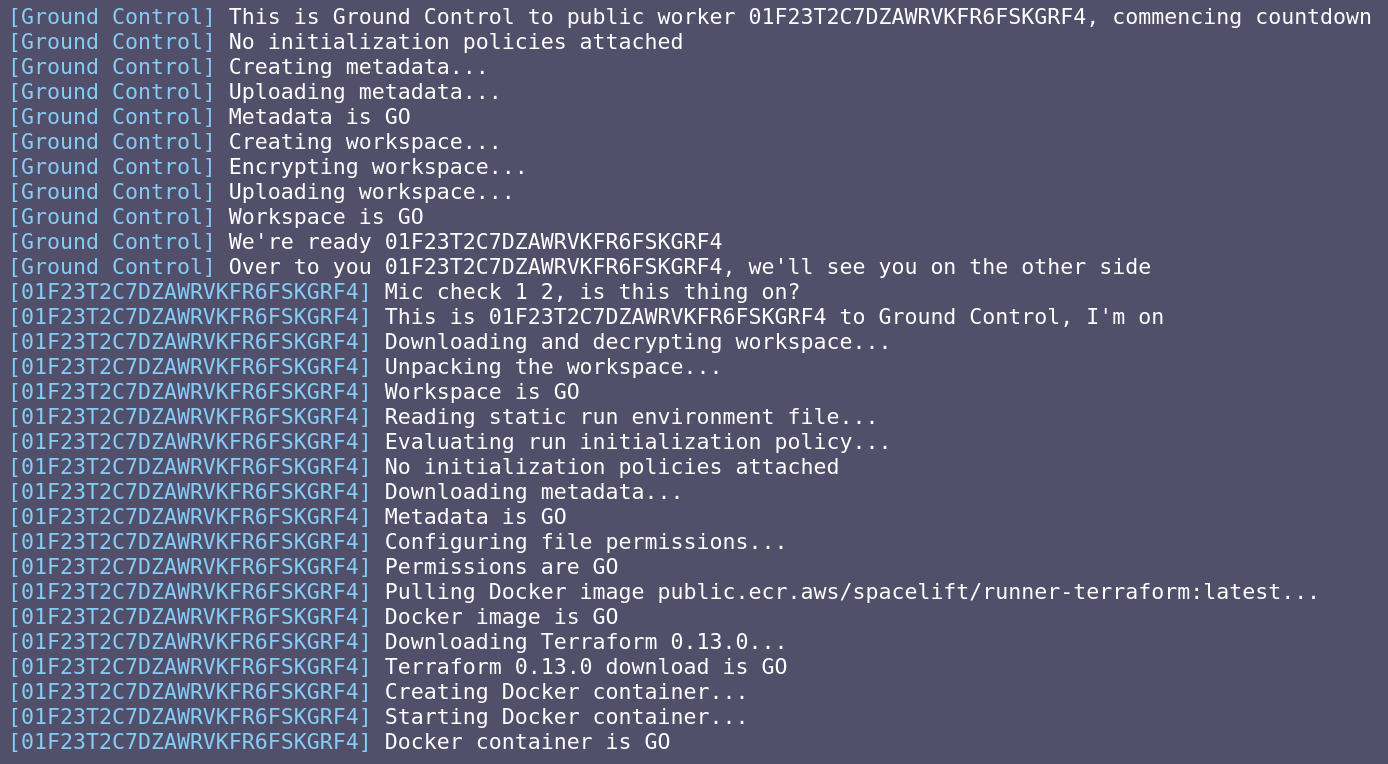 Note that Ground Control refers to the bit directly controlled by us, in a nod to late David Bowie. The main purpose of this phase is for Ground Control to make sure that the worker node gets everything that's required to perform the job, and that it can take over the execution.

Once the worker is able to pull the Docker image and use it to start the container, this phase is over and the initialization phase begins. If the process fails for whatever reason, the run is marked as failed.

The last phase where actual work is done and which is common to all types of run is the initialization. This phase is handled exclusively by the worker and involves running pre-initialization hooks and vendor-specific initialization process. For Terraform stacks it would mean running terraform init, in the right directory and with the right parameters.

If this phase fails for whatever reason, the run is marked as failed. Otherwise, the next step is determined by the type of the run being executed.

If a run transitions into the failed state means that something, at some point went wrong and this state can follow any state. In most cases this will be something related to your project like:

In rare cases errors in Spacelift application code or third party dependencies can also make the job fail. These cases are clearly marked by a notice corresponding to the failure mode, reported through our exception tracker and immediately investigated.

Failed is a passive state meaning no operations are performed while the run is in this state. It's also a terminal state meaning that no further state can supersede it.

Finished state means that the run was successful, though the success criteria will depend on the type of run. Please read the documentation for the relevant run type for more details.

Finished is a passive state meaning no operations are performed while a run is in this state. It's also a terminal state meaning that no further state can supersede it.

Some types of runs in some phases may safely be interrupted. We allow sending a stop signal from the GUI and API to the run, which is then passed to the worker handling the job. It's then up to the worker to handle or ignore that signal.

Stopped state indicates that a run has been stopped while Initializing or Planning, either manually by the user or - for proposed changes - also by Spacelift. Proposed changes will automatically be stopped when a newer version of the code is pushed to their branch. This is mainly designed to limit the number of unnecessary API calls to your resource providers, though it saves us a few bucks on EC2, too.

Here's an example of a run manually stopped while Initializing: 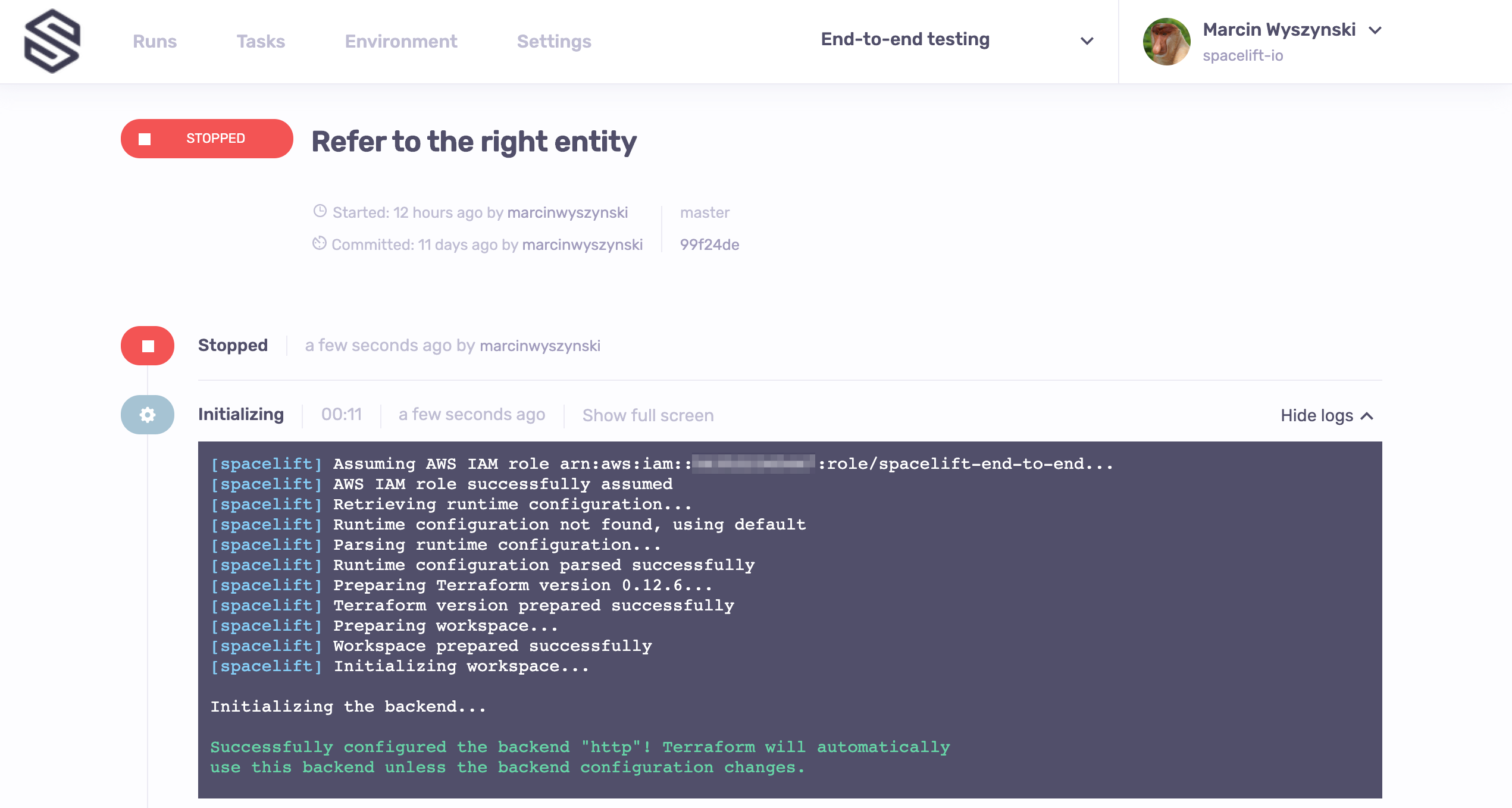 Stopped is a passive state meaning no operations are performed while a run is in this state. It's also a terminal state meaning that no further state can supersede it.

For your most sensitive Stacks you can use additional verification of Runs based on arbitrary metadata you can provide to Runs when creating or confirming them.

This metadata can be passed through the API or by using the spacectl CLI to create or confirm runs. Every time such an interaction happens, you can add a new piece of metadata, which will form a list of metadata blobs inside of the Run. This will then be available in policies, including the private-worker side initialization policy.

This way you can i.e. sign the runs when you confirm them and later verify this signature inside of the private worker, through the initialization policy. There you can use the exec function, which lets you run an arbitrary binary inside of the docker image. This binary would verify that the content of the run and signature match and that the signature is a proper signature of somebody from your company.

This works for any kind of Run, including tasks.